In the 60’s the immediacy of creating first prints ruled out preconceived ideas about art aesthetics. We had to deal with the elements of drawing and print technology all at once, then find a market and distribution. There were no commercial printing dyes available so we learnt the chemistry and made our own. Our early images did not have commercial awareness even though they would soon have commercial potential. All the influences we both collected on the way would be driving the images on the drawing board. Pop Art, Dada, Surrealism, Rock & Roll graphics would all be mashed into the mix – always searching to come up with something new.

In 1968 my lovely wife Molly White and I joined forces in the studio. I began to make ‘Multiples’. Molly had just exhibited her latest printed textiles at a Hull Traders show in Dering Street, London and prints of butterflies on silk at Libertys. She also began making Pop images woven into Knitwear (a first, I think). I had drawn an illustration of a tattooed man for Nova magazine and another piece that included some elements of photomontage – something we had both developed with our early 20th century pin-ups print. Molly was teaching part-time at Berkshire College of Art and I suggested she should use tattoos as a subject for the screen printing course but we decided we should do it ourselves. We threw everything into it and we have carried on printing together for the rest of our lives.

Many of our images have been about how the human body becomes the artform or is the inspiration for the work. Everything would stack up as we produced more and more screen-prints on T-shirts, shirts, underwear, jackets, jeans and sometimes on paper but the emphasis was always on T-shirts. These were our canvas.

Art Galleries are full of works of Art for sale and Museums full of works for us to admire. All our homes would have our favourite pieces of Art if we could afford to buy them. We’ve always drawn a fine line between art and design so when our work was shown at the first European Exhibition of Multiple Art in London’s Whitechapel Gallery called “3 to Infinity” in 1970, we felt more at home with the world of Fine Art.

Painting, Sculpture, Drawings, Prints and some Pottery, Fashion and Textiles are objects to be looked at and owned. In the “3 to Infinity” catalogue there were intriguing contributions from artists, designers and politicians about the identity of a work of art in the light of the broadening horizons in the art establishment. A designer defines a work as something that keeps your attentiveness for a long time whereas an artist says a work is something that comes from the human soul to express through Art the great freedom of being human. A designer sees the work of art primarily in its material form and measures the strength of the work in terms of it’s power to keep the attention of the viewer. The Artist is concerned with the transformation of materials used as an expression towards his or her understanding of some universal philosophical truth. if you had to separate the two, you could say the Artist is asking questions about the meaning of life whereas the Designer is finding answers to the practice of living.

It has been said our work in screen-printed T-shirts paved the way for the printed 70’s T-shirt revolution. The T-shirt was seen as a developing new art form but through the gathering potency of this ‘genre’, it was soon exploited by record companies and high street store chains. Now the massive input of the Internet and the post-punk-media revolt has generated more diversity into art and music than ever before. Together with the expansion of the global Television media, it has charged up the pace and changed the spectrum of creative output leaving everything open to new possibilities. By the 80’s, the urban graffiti artists were putting Art on the walls outside of the gallery rather than in it. At an exhibition we had at ‘La Viande Contemporary’ in London’s East End in 2007, the work was referred to as ‘Neo-Pop’ which may be an appropriate term for our work in art, media, fashion and design where the work has travelled along the perimeter of Multiple, Pop product and Punk-fashion, the Art gallery being our final destination.

The downside in a shrinking economy is the commercial manipulation of new ideas in Art. Fashion and Design through repetitious surveying and synthesis has levelled everything out into a constant stream of hybrid styles and images where anything with an individual spark is swallowed whole and distilled by a hungry commercial art & music industry desperate to maintain an updated styling of it’s products. Synthesis sucks, facts are no good without feel. If chaos is the condition for a creative surge then now is our time to be brave and step out of the mould. Molly and I are always aware that mere digital printing or auto screen-printing is no different from ripping a repro out of a book and chucking it into a frame. You gotta have soul!

Molly and I have worked together for over forty years – our work is driven by our relationship and each others interaction with the work as it develops. Screen-printing is a good medium for two people to come together. We are the work – the juncture where perception inspires creation and things begin to happen is where individual passions erupt and drive the imagination – we are the soul of the piece. The spark of creativity could come from either of us. Throughout the process of making the artwork and film positives for screens, the print would develop through mutually decided changes that would guide or divert the print along an inevitable course. When the image reaches the table we are free of the processing and the invention starts all over again. Our recent preoccupation has been to use the screen process similar to a Monotype or the epreuve d’essai, – the trial proof, so we can nurture and manipulate the image every time we print.

So we work as a Duo and we have always been completely independent as a Duo. Journalists, writers and museum curators always try to align us with other companies or designers – they will refer to us as Mr. Freedom designers, Paradise Garage or Granny Takes A Trip designers. They will say we designed for Libertys when in fact we never worked for those companies or designed anything especially for them, they sought us out and purchased the work we were producing at that time. We never made outfits for Iggy Pop, Johnny Thunders, Mick Jagger. Jacqueline Bisset, Marc Bolan, Lou Reed, Sid Vicious, Steve Jones, Glen Matlock, Paul McCartney, Malcolm McDowell and Ewan Mcgregor – they acquired them from us. We made those so called iconic pieces because we, like them, were only interested in creating something that hadn’t been done before – something completely new – those pieces were already made.

Since we joined The Paul Stolper gallery a few years back, we’ve had the complete luxury of working in the studio without having to think about selling the work. Paul Stolper has a rare eye for print – he loves it as we do! He understands print. He’s enthusiastic about all kinds of innovation and he’s quite OK about wading in with the inks, squeegees and diamond dust. Paul knows his history of print from antiquity to the very latest stuff. His vibrance and seriousness about emerging art and music genres and cultural changes inspires confidence. He has enthusiasm for images that are new and on the edge, that could be the blue touch-paper to some beautiful fireworks of the future.

During the last two years, we have made enlargements of some of our T-shirts and textiles. Our recent print images on paper are hybrids that have evolved from many years of printing T-shirts where we retain all the character of that journey.We have returned to that careful nurturing we take great care to develop every nuance and facet of the print. When we researched the type of paper we should use, we were amazed to find that the Bangladeshi hand-made papers were made from recycled cotton t-shirts – these papers were perfect for the print technology we had used for decades – nothing had to change. Our ‘Westernise’ print is the one Paul has given more importance but we are more drawn to our TV prints – a series which we are still expanding with new screens. Some images are from the 70′s and 80′s but many are from recent photographs. The latest set of images we produced this year are the “Liberty” prints and the “Butterflies & Bullets” and there are seven more ideas on the table. But we’ll still be inclined to revive more from our back catalogue to nurture those images that we never had the time to fully embrace.

Molly drives herself with the reminder that she has to start the day with a pencil in her hand to stay on a journey that’s forever changing. She says, “Sometimes you know exactly what you are searching for and sometimes everything happens on it’s own like there’s a ghost in your head. That’s what you’re living for – it’ s the only way to go forward in life and work. When you look back, that’s when you realise with surprise that the images you’ve made correspond so closely to the direction your life had taken at that time. It’s an organic development that doesn’t start or stop with a switch ….. But It would be great if you could have an ‘art switch’ that you could turn on and off – CLICK!”. 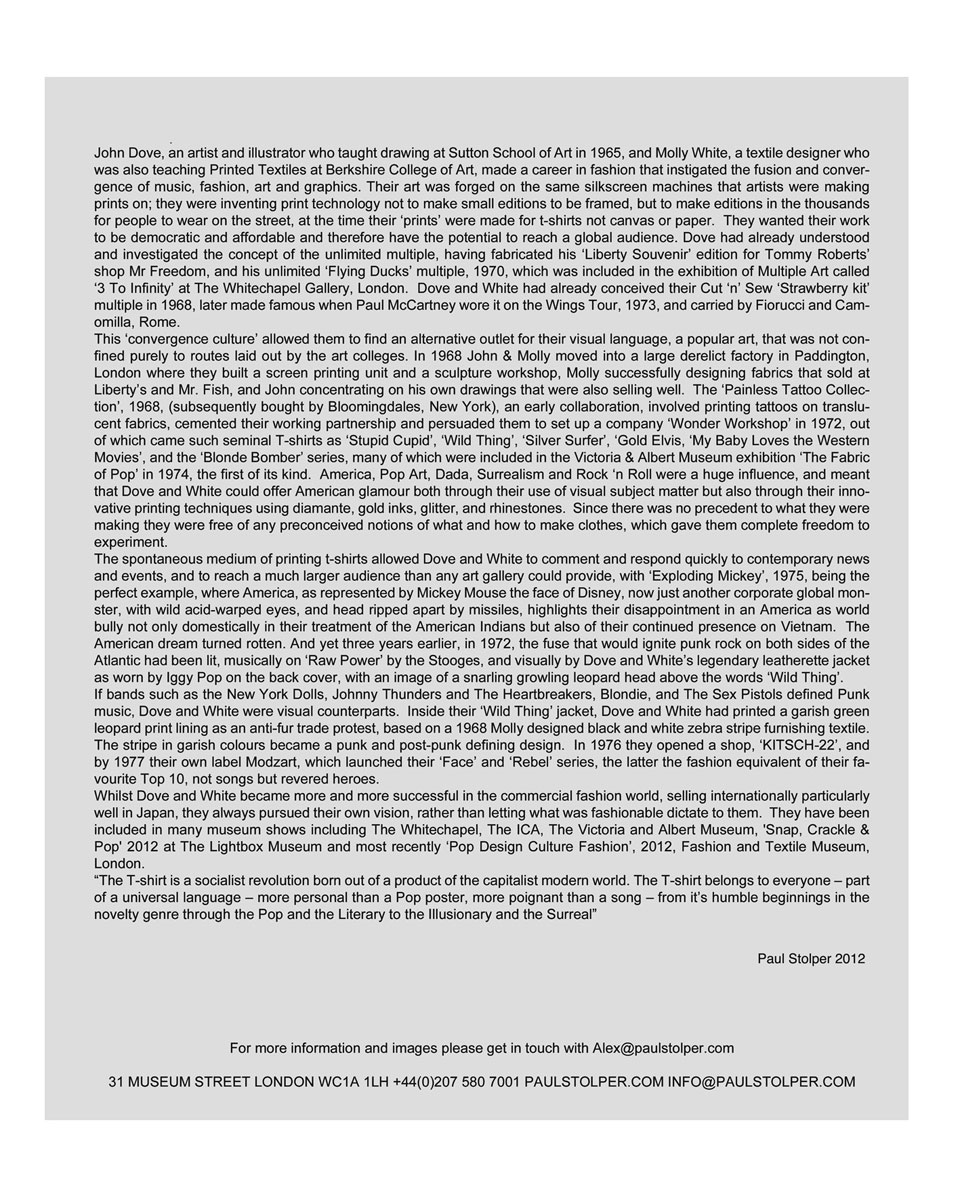