The Legendary Couple Who Shaped Punk Culture. A man and a woman who created printed T-shirt fashion – the origin of punk is here! I asked two English artists who sublimated the print T-shirt to fashion, John Dove and Molly White.

If there were no printed T-shirts in this world, street fashion would not be established?

Molly:
“At first, I printed a tattoo graphic on a fabric through which my skin could pass through, and made a T-shirt and a body stocking, it was an idea that I could wear a pattern of tattoos as clothes, that is, we called it The Painless Tattoo.”

The trigger of the break is the T – shirt of “WILD THING” which printed the face of leopard made in 1970. Marc Bolan, Mick Jaggar, and many other musicians wore it. It spreads globally and is seen to have been worn by Sid Vicious before the formation of Sex Pistols. At that time, the store that sold the most Wonder Workshop was “Paradise Garage” which was at 430 King’s Road of London. 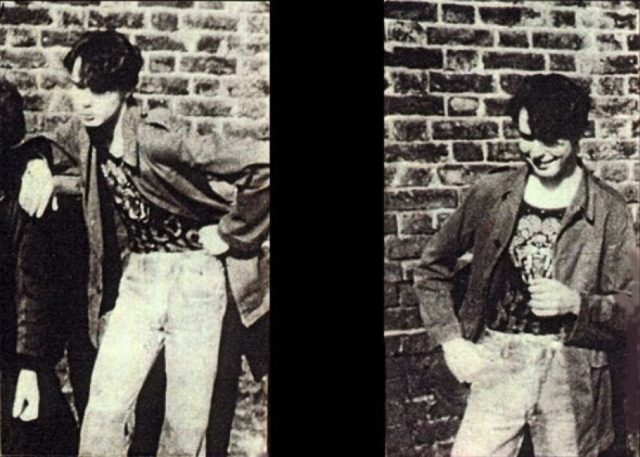 John:
“It was a very interesting shop. The Mustang out front with printed Tiger skin was not for sale (laughs). Our brands as well as obscure vintage items and records collected from all over the world were placed. Trevor Myles, the owner, had a good design sense, but he was not a manager, he was always behind in payments. One day he made a trip to Jamaica on honeymoon and Paradise Garage was taken over while he was away. 430 Kings Road (currently Vivienne Westwood Worlds End) was occupied….we were out”. 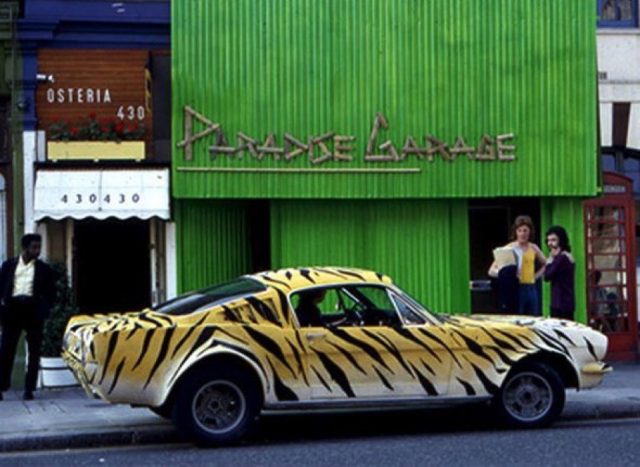 It was Malcolm McLaren who will take over the shop, which will later produce a punk rock band, Sex Pistols.

John:
“At that time, Malcolm was not a punk, he was a teddy boy. The name of the shop was changed to LET IT ROCK and it turned out to be Edwardian in style. We would have decided to go out anyway -Yo!”

Before and after that, John and Molly got acquainted with New Yorker Gene Krell (now the International Fashion Director of GQ JAPAN and VOGUE JAPAN) and his partner Martin Breslau. At that time they were running a psychedelic boutique named GRANNY TAKES A TRIP.

John:
“Gene and I soon agreed to stock our Wonder Workshop pieces at Grannys. Anyhow it was a cool shop, famous stylists, musicians and artists were in and out. This store was important for us as there were shops in New York and Los Angeles where American artists had also started wearing our clothes”.

The image of psychedelic may be strong but this shop contributed to the Street Clothes movement I think that it was another store before Vivienne Westwood and Malcolm McLaren. 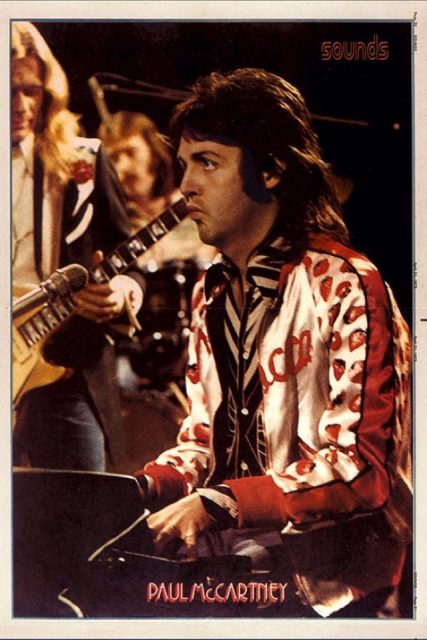 Around this time, T-shirts and blousons printed strawberries that can be said as one of John & Molly ‘s masterpiece work gathered big topics. In 1973, Paul McCartney wore it on the first American tour after The Beatles broke up. John seems to be happy to remember that time.

John:
“We first launched it as a” DIY kit. in 1969. It contained blouson patterns and fabrics – you can make it yourself with a sewing machine, but It seemed that nobody could make it, eventually we collaborated with a friend – designer named Dinah Adams to make it in satin at Grannys”.

Later in ’74 Paul McCartney ordered six blousons this time and it came to be called “Strawberry Fields Jacket” one day. The T-shirts sold explosively especially in Paris. Thirty years later, when his daughter Stella McCartney was designing for Chloe, she was also happy that she got inspiration from that jacket and made a strawberry T-shirt.

John:
“Stella told us, she sneaked into her father’s closet when she was a child and seems to have liked it a lot”. 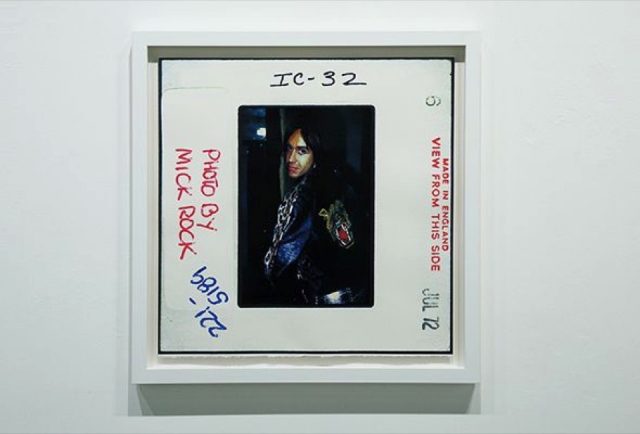 Then, when did the Punk movement become clear?

John:
“I think that the influence of music was big at first at the beginning of the 1970s. The movement of Punk was earlier in the United States and the phrase Punk-Rock had already been used in the United States in 1971. In the United States There was a band led by Lou Reed THE VELVET UNDERGROUND and Iggy Pop’s THE STOOGES, THE SEEDS and THE SONICS. We always said that the song “7 and 7 Is” of the American rock band LOVE 1966 is the first punk rock record on general release”.

Musicians like them were wearing clothes – printed T-shirts from PARADISE GARAGE and GRANNY TAKES A TRIP, so that followers imitated them, so that punk gradually became a street style.Through fashion, John & Molly had a great influence on the formation of punk. The two continued to produce iconic items even after that. Until today, their art is an inspiration source for many brands. For example, In 2013 COMME DES GARCONS collaborated with PAUL STOLPER GALLERY and JOHN DOVE AND MOLLY WHITE to make a reprint version of the riders’ jacket that IGGY POP wore in 1972. YUSUKE KOISHI was the liaison and LEWIS LEATHERS were the manufacturers. The following year, a bag collection by collaboration with the UK accessory brand CAMBRIDGE SATCHEL CO. was also introduced.

At the end of the interview, when asked, Youth culture has become hard to be born in the 21st century? Molly naturally nodded and opened up….

Molly:
“There is not such a thing. Things are different now. There were not these communication tools at that time, people are more isolated, if there is a proper youth culture it’s like instant coffee – only for this minute. The story of Punk is dead but Punk Rock exists in the underground all the time”.

So its not such a pessimistic view. The original seems to shine by all means, but surely there are a lot of small youth culture bids I think. A new culture comes from looking back on the past. The exhibition “Sensibility and Wonder” which can be found to touch on John & Molly’s history, is held at the Diesel Art Gallery in Shibuya, Tokyo, until November 9. Look at their work, I want you to feel the energy of the punk-roaring days.

In 1964, John Dove (1943 -) from Norwich United Kingdom – Painting and Printmaking, and Molly White (1944 -) from Norwich – Textile Design, formed an art unit in London. It is known as they are artists who influenced Vivienne Westwood and Malcolm McLaren who are said to be advocates of the punk movement. In 1969 they produced full-graphic T-shirts and jackets under the name of WONDER WORKSHOP and sold them in London and New York. With this activity, graphic T-shirts were recognised as fashion items, and it became popular all over the world. Today, along with contemporary artists such as Damien Hirst and Peter Blake, they continue art production activities as artists belonging to London’s PAUL STOLPER GALLERY.

PARADISE GARAGE 430 King’s Road, London, was a Rock’n’Roll/Surf revival boutique opened in April 1971 by fashion entrepreneur Trevor Myles with designers Dinah Adams, Diana Crawshaw and Chris Snow. John Dove and Molly White joined when Crawshaw and Snow left in July. In November, the store was acquired by Malcolm McLaren and Vivienne Westwood and closed down.

GRANNY TAKES A TRIP 488 King’s Road, London, was a psychedelic boutique opened in late 1965 by the tailor John Pearse with designers Nigel Weymouth, Sheila Cohen and illustrator Michael English. In 1969, the founders sold the store to London entrepreneur Freddie Hornik with partners Gene Krell and Martin Breslau from New York. later they opened GRANNY TAKES A TRIP stores in New York and in Los Angeles. In 1974 the store was closed down.