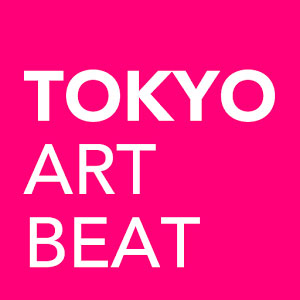 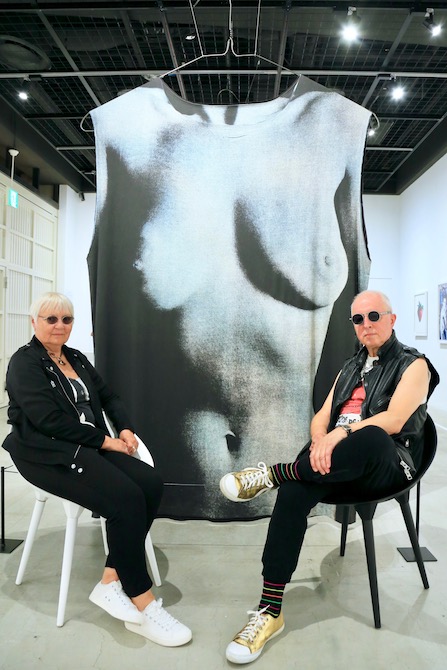 When you step into the “SENSIBILITY AND WONDER” exhibition being held at DIESEL ART GALLERY facing Meiji Dori, you are confronted with an exciting space. It is John Dove & Molly White * 1 that captivates the visual world of punk. The two from Britain have published various works over 50 years. They are best partners in both public and private life. From the 1960’s to the present they continue to be in the front lines of street culture. They have iconic pieces relating to musicians such as Iggy Pop, Mick Jagger, Sex Pistols and Paul McCartney. The gallery shows many works unpublished in Japan and they are here visiting Japan this time for the exhibition. At Tokyo Art Beat, I had the opportunity to interview them.

They are a couple, a best friend, a battlefield, a romance so this is to reveal the legendary artist’s face.

On this day, John and Molly decided to wear the punk fashion of the sleeveless jacket and sunglasses looking perfectly fitting with the show. Here are two people with a lifetime of artistic activities together, but I asked in what kind of framework they are making works. It’s Molly first to laugh, “He is in charge of e-mail.” If anything John is good with the modern world, he is responsible for administrative matters and e-mail exchanges so apparently, there seems to be a rough division of roles between the two. Originally from textile design Molly is in charge of graphics and screens. It is said that Molly is the source of painting design ideas from imitating animal skins such as leopards (1968) and zebras (1963) in which are their now global typical graphic and print designs. On the other hand, John’s specialty is sculpture and painting. The precise drawing often seen in their work is produced mainly by John.

While clearly separating their respective roles, they often both talk about ideas for the works. In the series with a celebrity’s face as a motif, “We were looking for an iconic face while referring to films, music and television”. Although the characters and roles of the two artists seem to be true to each individual they sometimes happen in reverse, they can trust each other.

”When I tell Molly about a new idea, it will have a strong general direction. I never rest from this rapport – I like to keep up a constant flow of new ideas one after another, even when working on the one work but unlike me, Molly has the obsession with the one piece – to complete the one idea and she often will restrain us within the orbit of the idea. She is not likely to waste our time and energy whereas I will be optimistic and experimental. Of the two of us, she is more realistic – for me, sometimes I may even feel pessimistic (laugh) ”

Awesome expression, where are the roots?

Two people who have produced works while converging art and music, including creating the jackets for Iggy & The Stooges “Raw Power”. Is there an artist who influenced their style? “Recently, we have been influenced by Damien Hirst, Harland Miller, Jeff Koons, Dick Jewel, Richard Prince and many other artists, and photographers. ” John said. “Dick Jewel, who has not been heard of much in Japan is an artist who creates collages using photographs abandoned in the garbage cans installed in certification photography machines”. The two people are constantly aware of contemporary art in Britain and the United States, among them, there is a special connection between Damien Hirst and John & Molly who belong to the same PAUL STOLPER GALLERY. Hirst, a famed contemporary British artist, is also a collector who owns a large number of their works. Hirst and John & Molly respect each other as contemporary artists. Of course, there is also a great influence from the music scene. “Punk, including Iggy Pop, Rock Music from the 50’s to the 60’s, Soul Stuff, Reggae, Pan Music …… I’m interested in all sorts of genres,” he says. “Recently, it seems that we are more familiar with Hip-Hop due to close family influences”. Their Son-in-law Patrick Turner PhD, is an English professor of Hip-Hop.

There is always flexibility to accept new content without sticking to the one era. They are grasping the shifting trends from the bird’s-eye viewpoint without being drawn by the trend of the times. This New age feeling may be the secret to keep producing original works.

A half century after living with Punk. What is it that captures their interest “now”?

“Fashion” as a keyword cannot be removed in talking about their work. The series of screen prints – the main feature of this exhibition, is based on the fact that the design of the T – shirt print became the screen print on paper. The two have always been concerned to deliver their work to a wider range of people using the now familiar media of T – shirts. However, there are cases where the position of fashion in the context of Art is often judged to be less important than other art forms. One reason for this is that fashion is strongly linked to marketing and commercial design. How do the two who continue to publish art works with a high fashion profile, capture the relationship between Fine Art and Street Art?

John said: “Our work is, of course, different, but sometimes there are strong commercial elements included in the fashion context. I think that the strength of creative fashion has become a thing of the past largely due to the power of the Internet. Fashion is sent all over the world through the Internet, and fast fashion copies of luxury brands collections are a daily routine”. John says that “fashion can be a more personal relationship” against the rapidly expanding modern fashion market. According to this phrase, if the two are working on T-shirts – the fashion item, they are concerned with more than just the commodity, but as a tool that can express individual ideas. For John and Molly, in fact, Punk culture, centred on music and fashion, but there was also a philosophical side – images that form a level of raising awareness in society.

Looking back on these situations, the two do not deny the expansion of the Internet. In response to the question ‘What kind of environment are the contemporary artists put in?’, The two answered….

“With the evolution of our ’computer world’, the environment surrounding modern youth has changed dramatically from the past, contemporary artists tend to link social issues and share problems of social consciousness by utilising social networks. There are global communication channels, unlike the days when we were young, but in local terms, young people are more isolated than we were”.

John and Molly seem to have a positive impression on the Internet as a means of communication for modern youth. “It is multi-lingual, multi – cultural and it’s a documentation of all our history – in fact, it’s the history of the world!” The two passed through this part of the discussion rapidly “For example, it can be said that Boston’s young Punk music generation also has a common style with British Punk Rockers of the 1970’s”. When looking at musicians and artists of the Internet generation, they are conscious they are from an age of 60’s and 70’s genealogy.

Yuki Saigi: Born in Okinawa in 1993 and raised in Kobe. After graduating from Kobe University, he is enrolled in the master course of the Department of Art and Art at Tokyo National University of Fine Arts and Music. The research theme is about the representation of women in Artwork. If you go on a date Shinjuku Gyoen. »Other articles